The Light of life 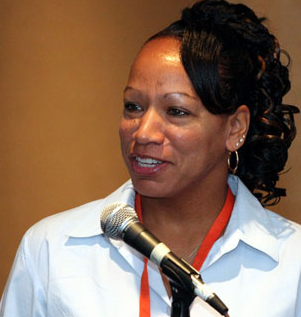 Missionary women often wrote about converts who were "rescued from darkness," and "brought into the glorious light." The repetition of language is striking as I'm re-reading letters and updates sent by early Pentecostal women to their supporters and families.

It's highly unpopular today -- offensive even -- to refer to other religions as "dark" or their adherents as being "blinded by the Devil." Further, it's considered prejudicial to say they have "come to the light of Christ" upon becoming Christian believers. But missionaries in the early twentieth century had no such hang-ups or demands to be politically correct. They said what they believed, that those without Jesus were utterly without salvation or spiritual sight.

I've noticed a pattern in most denominations: there's no point in being a missionary when missionary language is "cleaned up," where thinking shifts from bringing good news to the desperate to adding Christian myths to people who already are doing pretty well, and when the desperation of sharing the gospel dissipates. There's good in serving as a social worker, psychologist, educator, or helper. 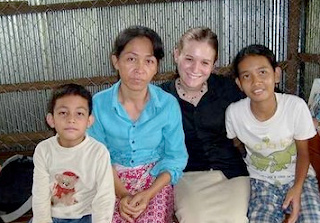 But following a call as a missionary thrust into a harvest with apostolic fervor to "rescue the perishing" and share the light of the gospel of Christ? Nope. Those fanatics disappear into a milieu of denominational do-gooders. The Story becomes secondary or vanishes altogether.

I'm refreshed by reading the letters. Through their suffering, through their rejection by the people they love, through their hardships, and because of their stamina, the women ground me in reality.

They show that no matter how culture changes, human nature stays the same. Our condition is blindness, lostness, corruption, and an inclination to wickedness.

Whom will you tell the Story today? Who is desperately in need of Good News?

*You light a lamp for me. The LORD, my God, lights up my darkness. In your strength I can crush an army; with my God I can scale any wall. Psalm 18:28–29 NLT
*When Jesus spoke again to the people, he said, "I am the light of the world. Whoever follows me will never walk in darkness, but will have the light of life." John 8:12 NIV 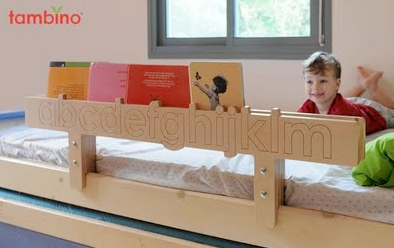 When I was a kid, this could have been my dream bed. Imagine, waking, stretching, rolling over, and reaching out with your favorite book at hand!


If you could design your dream bed, somewhere you could keep resting while doing what you love, would it have a work table, hammer, and electric drill fastened to the side? A rolling pin and pie tin? An easel, brushes, and paints? A trowel and trug?


Each of us finds our true self and is made whole in meaningful work. It's part of the curse and the blessing of being human. The work we choose and that makes us thrive isn't always the work we are paid to do. Sometimes we draw a salary so we can volunteer, dream, create, plant, and build.


What are you working on, that brings you joy and delight?


Read more:
*My soul finds rest in God alone; my salvation comes from him. He alone is my rock and my salvation; he is my fortress, I will never be shaken. Psalm 62:1-2 NIV

*Go to the ant, you sluggard; consider its ways and be wise! It has no commander, no overseer or ruler, yet it stores its provisions in summer and gathers its food at harvest.  How long will you lie there, you sluggard? When will you get up from your sleep? A little sleep, a little slumber, a little folding of the hands to rest— and poverty will come on you like a bandit and scarcity like an armed man. Prov. 6: 6-11 NIV


*We do, however, speak a message of wisdom among the mature, but not the wisdom of this age or of the rulers of this age, who are coming to nothing. No, we speak of God’s secret wisdom, a wisdom that has been hidden and that God destined for our glory before time began. None of the rulers of this age understood it, for if they had, they would not have crucified the Lord of glory. However, as it is written: “No eye has seen, no ear has heard, no mind has conceived what God has prepared for those who love him”-- but God has revealed it to us by his Spirit. The Spirit searches all things, even the deep things of God. 1 Corinthians 2:6-10 NIV
Posted by http://peacefulones.blogspot.com No comments: 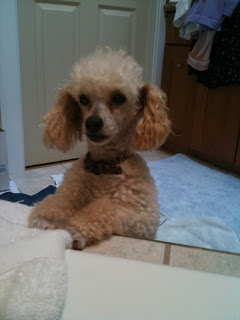 Two weeks ago, a top poodle breeder gave me a 6 lb little bundle of energy, an adult white doggie. Today, I gave her back.

I really like our dog, a black toy poodle named Missy. She's laid back, loves to walk or run alongside the bike, and barks up a storm when someone comes to the door before plopping down at my feet. She loves men and boys - her favorite person at her home-before-us was a 17 year old boy. She's not really a kid's dog, though she loves when the Romanian Pentecostal kids chase her around the park on Monday nights. It's become a tradition - they show up with their parents: the women chat while the men play sports. So the kids are left to run around and make up their own games, including "Catch the Poodle." (Not a chance, Missy is a very quick and athletic 8-pound doggie!) 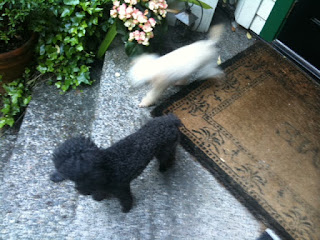 I thought a companion dog would be nice. But our new addition raced in nervous circles that distracted me from studies, had halitosis that almost knocked us over some mornings, and got carsick. I looked in the rearview mirror last week to see her doing a handstand on front paws, avoiding food returned as you-know-what. (Pull over, clean her seat, ugh.) She learned to walk on a leash, stuck to me like a shadow, and even tried to defend me Saturday by attacking my brother's dog. Luckily her jaws are so small she couldn't get a grip on his sturdy Jack Russell Terrier muscles.

It's been funny and fun to have another animal around. Seeing how God gave Sugar a marvelous personality and a unique temperament reminded me that he loves his creatures. Each of us is special in his sight. I won't miss the anxious pacing or the bad breath. But I wish Sugar well, wherever she ends up. Thanks to Joann for her generosity in giving and receiving back.

Read more:
*Even the sparrow has found a home,
and the swallow a nest for herself,
where she may have her young—
a place near your altar,
O LORD Almighty, my King and my God.  Psalm 84:3

*Are not five sparrows sold for two pennies? Yet not one of them is forgotten by God. Indeed, the very hairs of your head are all numbered. Don’t be afraid; you are worth more than many sparrows. Luke 12:6-7 NIV
Posted by http://peacefulones.blogspot.com 1 comment:

The world. A strange place.

When you run out of horses... 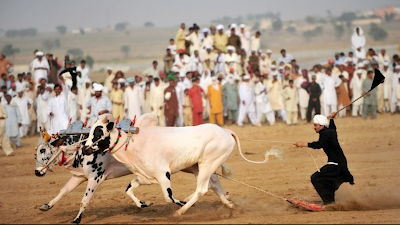 And when your neighbors can see what your treasures are... 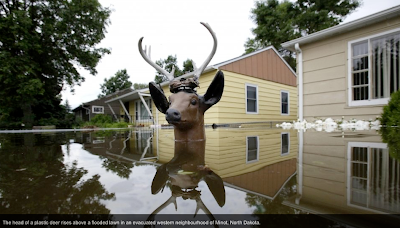 The world. A strange place.
Because it's populated by people.
Posted by http://peacefulones.blogspot.com No comments: 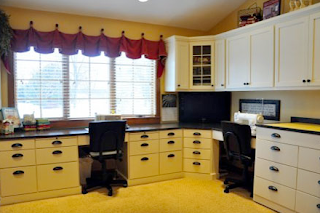 Just saw it all: a kitchen, complete with cupboards and counters. The sink and stove are gone. The homeowner turned the whole area into her office and studio.

What a great idea. So many lovely kitchens languish because people don't cook. Why waste the space by squirreling yourself away in a back bedroom when you could bring your work and art to the gathering place? It's somewhere to cook up a storm of creativity and plop down your chopsticks and Chinese takeout container, too.

What room would you turn into your playroom, if you could?

*Praise the LORD, O my soul; all my inmost being, praise his holy name. Praise the LORD, O my soul, and forget not all his benefits— who forgives all your sins and heals all your diseases, who redeems your life from the pit and crowns you with love and compassion, who satisfies your desires with good things so that your youth is renewed like the eagle’s. Psalm 103:1-5 NIV
*Here is another illustration Jesus used: 'The Kingdom of Heaven is like a mustard seed planted in a field. It is the smallest of all seeds, but it becomes the largest of garden plants; it grows into a tree, and birds come and make nests in its branches.
*Jesus also used this illustration: 'The Kingdom of Heaven is like the yeast a woman used in making bread. Even though she put only a little yeast in three measures of flour, it permeated every part of the dough.' Matthew 13:31–33 NLT
*Be imitators of God, therefore, as dearly loved children and live a life of love, just as Christ loved us and gave himself up for us as a fragrant offering and sacrifice to God. Ephesians 5:1-2 NIV
Posted by http://peacefulones.blogspot.com No comments: 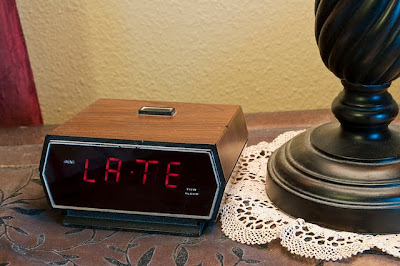 How many of us are in this situation regularly — because we didn't plan our leave-the-house routine well enough, or because we fell prey to what Kathleen Nadeau, also in ADDItude Magazine, called one-more-thing-itis?

We know that running late can become a bad habit, but these words from Laurie Perry, also known as Crazy Aunt Purl, remind us just how serious a problem this can become:

This is what happened last month when that lady hit my Jeep. After the crash she sat in her car, writing out her phone number for me, saying, "I was late for work." I remember looking at her with absolute disbelief, thinking You almost killed me because you were late for work?

That line keeps coming back to me at the oddest times. I'll see someone blow through a red light and hear that lady saying, I was late for work. And then I think, I hope they don't kill someone just because they couldn't bother to leave on time for work today. 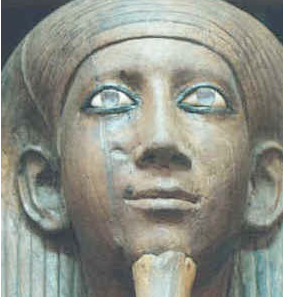 Some people are book-smart. Others, people-smart. Others can be administratively gifted, good with finances, or have an eye for design.

Joseph in the Bible is an interesting character. Here's part of his story. The country's ruler had asked him to interpret two troubling dreams:

"It is beyond my power to do this," Joseph replied. "But God can tell you what it means and set you at ease." [He asked God for help, and proceeded to interpret.]

Then Pharaoh said to Joseph, "Since God has revealed the meaning of the dreams to you, clearly no one else is as intelligent or wise as you are. You will be in charge of my court, and all my people will take orders from you. Only I, sitting on my throne, will have a rank higher than yours." 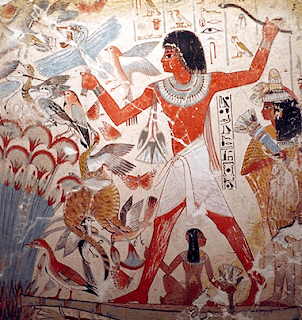 People "under the influence" of the Holy Spirit have spiritual smarts. They understand God's ways. It may be easy to mistake such godly wisdom for intelligence.

However, when knowledge and wisdom are combined as in Joseph's case, the person becomes a valued part of a team, provided the leader is not threatened by someone bigger and better than themselves. Pharaoh proved his own leadership skills by elevating a younger man to greatness. Thereafter, he could relax and leave the administration in capable hands.

Smart Joseph. True. But smart Pharaoh, too!
Posted by http://peacefulones.blogspot.com No comments:

Want to do adult improv?

Savell has years of experience directing and acting on stages along the West Coast and Chicago, teaching and coaching, and has served on the staff and boards of a number of theatre companies, including Hollywood’s Actors Co-op and South Coast Repertory Conservatory in Costa Mesa.

Seasonal support provided by The Charles Simonyi Fund for Arts and Sciences, The Seattle Foundation, 4Culture, ArtsFund and PONCHO.
Posted by http://peacefulones.blogspot.com No comments:

Email ThisBlogThis!Share to TwitterShare to FacebookShare to Pinterest
Labels: improv

Father's Day to a loving meanie